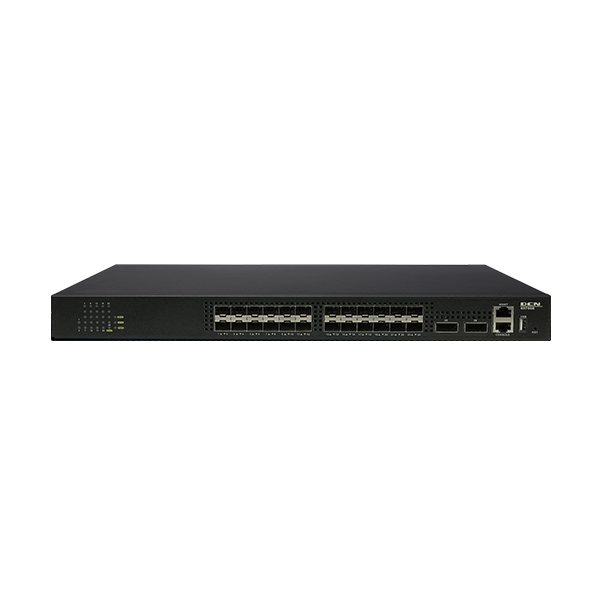 
Send email to us Download as PDF
User Manual

The 10 Gigabit Ethernet connectivity of S5750E-26X-SI is accomplished via a hot-pluggable 10 Gigabit SFP+ transceiver which supports distance up to 300 meters over multimode fiber and 10 to 40km over single-mode fiber (The distance depends on the optical module chosen). S5750E-26X-SI supports built-in redundant AC and DC power supplies for different environment applications.

Virtual Switch Framework (VSF) could virtualize multiple DCN switches into one logical device, achieves the sharing of information and data tables between different switches. The performance and ports density of the virtualized device is greatly enlarged by times under VSF. VSF also provides simplified management work for the network administrator and more reliability.

G.8032 provides sub-50ms protection and recovery switching for Ethernet traffic in a carrier ring topology. S5750E-26X-SI supports G.8032 v2 and can be deployed in a variety of complex network topologies including single ring, tangent ring, intersecting rings, double rings, and other home networking.

Multi-process MSTP. When a new access ring can be implemented by creating a new process of MSTP, the new ring does not affect the existing traffic. And each process may run different spanning tree protocol.

DCN EMVTE technology (Enhanced Multi-VLAN subnet Traffic Engineering) is a multi-link backup and load balancing solution based on multiple VLAN subnets for the dual-homing network. It can achieve faster switching and convergence of the uplink through the ULPP (Uplink Protection Protocol) and ULSM (Uplink State Monitor) protocol so that network performance is guaranteed.

Ingress/Egress Access Control Lists (ACLs) can be used to restrict access to sensitive network resources by denying packets based on L2/L3/L4 headers information. And for some services that are based on time, the product can support time-based ACL to match the requirement.

S5750E-26X-SI supports many more L2 security features such as ARP guard, Anti-ARP scanning, and other ARP and MAC Security technology to protect network security and reliability.